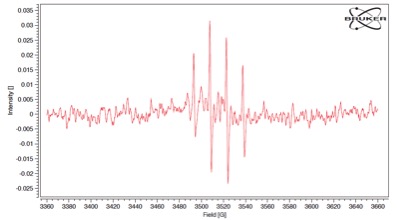 Electron Paramagnetic Resonance, EPR, is a spectroscopic technique that detects species that have unpaired electrons. It is also often called ESR, Electron Spin Resonance. A surprisingly large number of materials have unpaired electrons. These include free radicals, many transition metal ions, and defects in materials. Free electrons are often short-lived, but still play crucial roles in many processes such as photosynthesis, oxidation, catalysis, and polymerization reactions. As a result EPR crosses several disciplines including chemistry, physics, biology, material science, medical science and many more.

EPR is a magnetic resonance technique very similar to NMR, Nuclear Magnetic Resonance. However, instead of measuring the nuclear transitions in our sample, we are detecting the transitions of unpaired electrons in an applied magnetic field. Like a proton, the electron has a spin, which gives it a magnetic property known as a magnetic moment. The magnetic moment makes the electron have like a tiny bar magnet similar to one you might put on your refrigerator. When we supply an external magnetic field, the paramagnetic electrons can either orient in a direction parallel or antiparallel to the direction of the magnetic field. This creates two distinct energy levels for the unpaired electrons and allows us to measure them as they are driven between the two levels. Initially, there will be more electrons in the lower energy level (i.e, parallel to the field) than in the upper level (antiparallel). We use a fixed frequency of microwave irradiation to excite some of the electrons in the lower energy level to the upper energy level. In order for the transition to occur we must also have the external magnetic field at a specific strength, such that the energy separation between the lower and upper states is exactly matched by our microwave frequency. In order to achieve this condition, we sweep the external magnet’s field while exposing the sample to a fixed frequency of microwave irradiation. The condition where the magnetic field and the microwave frequency are “just right’ to produce an EPR resonance (or absorption) is known as the resonance condition. 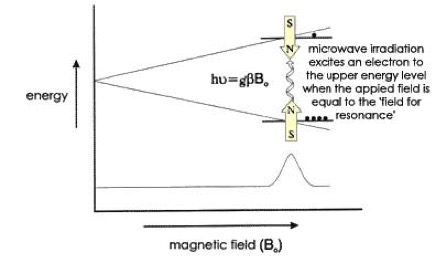 Only EPR detects unpaired electrons unambiguously. Other techniques such as fluorescence may provide indirect evidence of free radicals, but EPR alone yields evidence of their presence. In addition, EPR has the unique power to identify the paramagnetic species that is detected. EPR samples are very sensitive to local environments. Therefore, the technique sheds light on the molecular structure near the unpaired electron. Sometimes the EPR spectra exhibit dramatic line shape changes, giving insight into dynamic processes such as molecular motion or fluidity. The EPR spin-trapping technique, which detects short-lived reactive free radicals, very nicely illustrates how EPR detection and identification of radicals can be exploited. This technique has been vital in the biomedical field for elucidating the role of free radicals in many pathologies and toxicities. EPR spin-labeling is a technique used by biochemists whereby a paramagnetic molecule (i.e, the spin label) is used to tag macromolecules in specific regions. From the EPR spectra reported by the spin label, they can determine the type of environment (hydrophobicity, pH fluidity, etc.) in which the spin label is located.